Argentina won their third World Cup in an extraordinary final on Sunday as they beat France 4-2 on penalties after Lionel Messi scored twice in a 3-3 draw that featured a hat-trick for Kylian Mbappe as the holders recovered from 2-0 down.

It was an extraordinary night of drama, high emotion and fluctuating fortunes, delivering one of the all-time great finals to cap a wonderful tournament as its two star players delivered command performances on the biggest stage of all.

Argentina had looked to be cruising to a one-sided victory after Messi’s penalty and a brilliant goal by Angel Di Maria in the first half put them in total control but Mbappe converted an 80th-minute penalty and volleyed in an equaliser a minute later to take the game to extra time.

Messi put Argentina ahead again but Mbappe levelled with another penalty, becoming the second man to score a World Cup final hat-trick after England’s Geoff Hurst in 1966.

That took the game to a shootout where Argentina keeper Emiliano Martinez saved Kingsley Coman’s effort and Aurelien Tchouameni fired wide to give Gonzalo Montiel to chance to win it, which he gleefully took.

Argentina have now won six of their seven World Cup shootouts, including the quarter-final against the Netherlands a week ago when they also blew a 2-0 lead, while France have lost three of five, but with two of those defeats coming in finals. 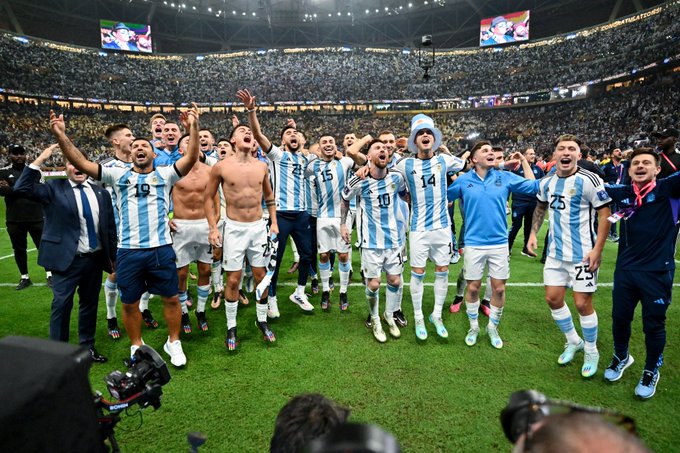 The result means Messi, who was playing in his record 25th and final World Cup match, achieved a fairytale ending as he lifts the trophy for the first time. The only major honour to have eluded him in his career.

It is Argentina’s third World Cup title after previous victories in 1978 and 1986.

Meanwhile France, who won the tournament’s previous edition in 2018, were denied in their bid to become the first team to win back-to-back World Cups since Brazil in 1962.