Argentina goalkeeper Emiliano Martinez has been awarded the Golden Glove after helping Argentina win the 2022 FIFA World Cup in Qatar.

Martinez saved a spot-kick from Kingsley Coman as Argentina beat France 4-2 in a penalty shootout after an epic 3-3 draw in Sunday’s final.

The Aston Villa keeper had earlier saved two penalties in a shootout win over Holland in the quarter-finals.

Unlike in some other competitions where the Golden Glove is awarded based solely on the number of clean sheets, the World Cup Golden Glove is decided by vote among experts. 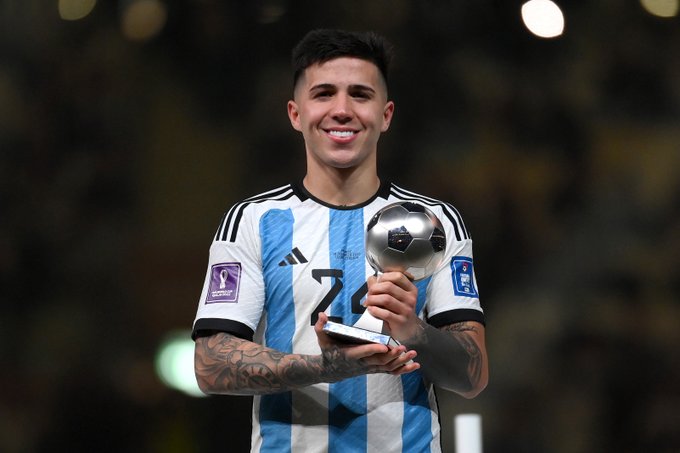 The 21-year-old was in stunning form throughout the tournament in Qatar, becoming the surprising driving force of Argentina’s midfield despite only making a hand-full of appearances for his nation prior to the World Cup.

Fernandez will now undoubtedly be linked with a number of clubs in the upcoming January transfer window after his winter heroics.

Kylian Mbappe won the Golden Boot award after scoring a hat trick for France in their World Cup final defeat against Argentina, while Lionel Messi has made history by becoming the first player to win the World Cup Player of the Tournament twice.

Emiliano Martinez made his international debut for Argentina 🇦🇷 on June 3, 2021 against Chile.

Since then he has won:

And won the Golden Glove at the Copa America and World Cup. 👏🏾👏🏾 pic.twitter.com/E26C5UWOgF

Argentina at the #FIFAWorldCup

Argentina won the final 4-2 on penalties after the game ended 3-3 after extra-time.