Arsenal have confirmed that Eddie Nketiah has signed a new long-term deal with the club.

The 23-year-old ended the 2021-22 season as Mikel Arteta’s first-choice centre-forward, but he was due to become a free agent at the end of the month.

Nketiah had rejected the chance to extend his Emirates stay during the season while he was playing backup to Pierre-Emerick Aubameyang and Alexandre Lacazette.

Aubameyang’s exit for Barcelona did not lead to an upturn in fortunes for Nketiah, but he staked his claim in the first team while Lacazette was out with COVID-19.

It’s time to hear from the man himself, take it away @EddieNketiah9 🤳

Nketiah scored braces against Chelsea and Leeds United, as well as a strike against Everton on the final day, and he has now committed himself to Arsenal for what is believed to be the next five years.

I’m delighted Eddie is staying with us. He represents what we are all about and all the values of the club.

We are very happy that he has extended his contract and now we have to get to work and continue to develop the great talent and person that we have in him.

The foundations of this squad are built on young talent and in particular those who have come through our Academy system.

Eddie was released by another club as a young man but has always shown he has the attitude as well as the ability to become a top player. The fact he’s signed a new contract is an important part of our squad planning for next season and we’re all delighted.

Nketiah has been bestowed with the honour of wearing the famed number 14 jersey after signing a new deal, previously worn by Aubameyang and all-time top scorer Thierry Henry. 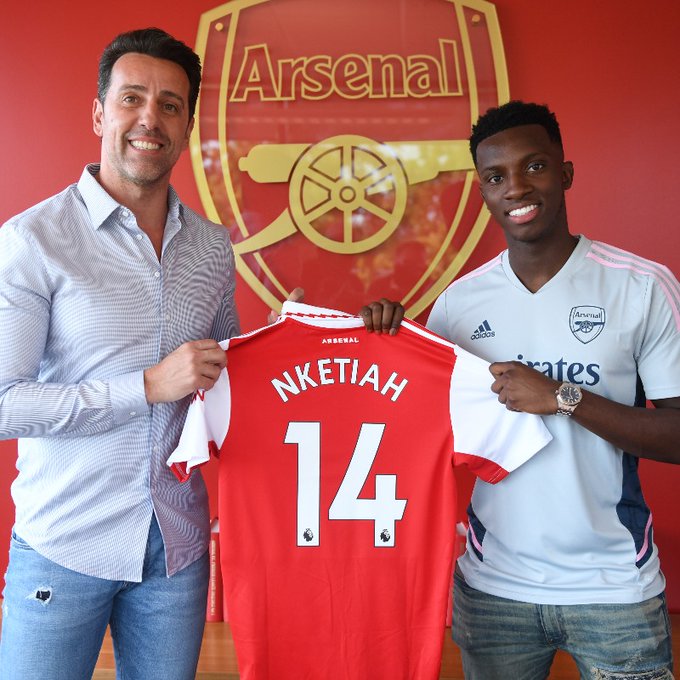 The former England Under-21 international ended the 2021-22 season with 10 goals in all tournaments after hitting a quintet of strikes in the EFL Cup.

Nketiah now boasts a total of 23 goals and two assists in 92 appearances for the Gunners since coming through their youth academy, and he has won the FA Cup and Community Shield while at his boyhood club.

Nketiah’s new contract is not expected to stop Arsenal pursuing a new striker in the transfer market, with Manchester City’s Gabriel Jesus still earmarked as a priority target.

The Gunners have only announced the signing of Marquinhos so far, but Fabio Vieira’s arrival from Porto is imminent after the Portuguese club confirmed that the 22-year-old was heading for North London.

Vieira has completed his medical and has agreed terms on a five-year deal, but Arsenal may not announce the Portuguese midfielder’s arrival until early next week.