The Falconets of Nigeria early on Thursday morning rounded off their group stage campaign in style by beating Canada 3-1 in the ongoing FIFA U20 Women’s World Cup taking place in Costa Rica.
Coach Chris Danjuma’s ladies had before now relied on late goals to secure slim 1-0 wins over France and South Korea but the game against Canada was a completely different ball game.

Interestingly, it was the Canadian girls that drew the first blood, albeit from an error in the Falconets’ defence.

But two goals from the penalty spot by Esther Onyenezide and another goal in the second half by Chioma Olise saw the Falconets cruising to their biggest win so far in the ongoing tournament in Costa Rica.

NOTHING STOPPING THE FALCONETS 🦅

Soaring through to the #U20WWC quarter-finals as Group C leaders 👏

Did you know that at the ongoing FIFA U20 Women’s World cup, our Nigeria falconets has 100% group stage win, winning all three of their group stage games.
Defeating France 1-0
South Korea 1-0
Canada 3-1… pic.twitter.com/ksAfxg1e5B


The victory against Canada means that the Falconets racked up a total of nine points from three group games.

The Falconets also finished top of group C and sealed their place in the quarterfinals of the competition.

The Nigeria U20 ladies will now take on the Netherlands in the quarterfinals of the competition.

The Netherlands have had a decent campaign in Costa Rica as they qualified for the quarterfinals from group D. 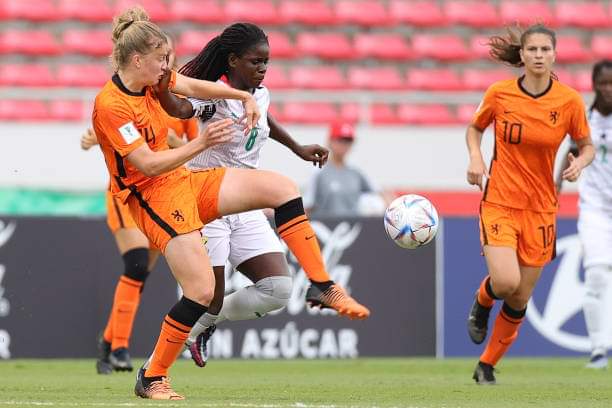 The Netherlands started their tournament with a 1-0 loss to Japan.

They bounced back to defeat the United States of America (USA) 3-0 in their second group game.

To wrap up their group phase they recorded a 4-1 demolition of African contenders Ghana.

Ghana has failed to go past the group stage for a sixth time.

The game between the Netherlands and the Falconets will take place at the Estadio Alejandro Morera Soto in Alajuela, venue of Nigeria’s first three group games.